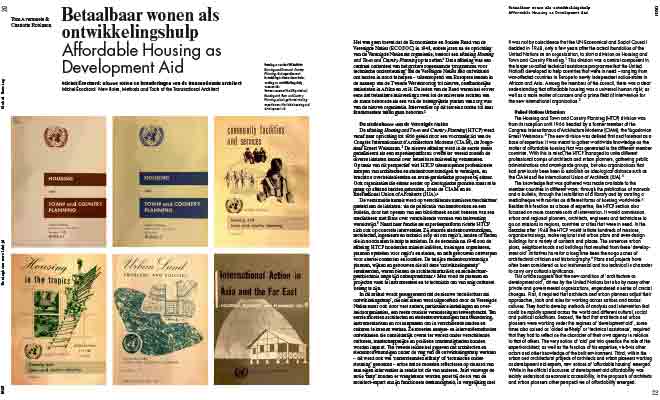 It was not by coincidence that the UN Economical and Social Council decided in 1948, only a few years after the actual foundation of the United Nations as an organization, to start a division on Housing and Town and Country Planning.1 This division was a central component in the larger so-called technical assistance programme that the United Nations developed to help countries that were in need – ranging from war-affected countries in Europe to newly independent nation-states in African and Asia. Among the members of the council, there was a clear understanding that affordable housing was a universal human right, as well as a main matter of concern and a prime field of intervention for the new international organization.2 . . .

The articles by Luce Beeckmans, “The adventures of the French architect Michel Ecochard in post-independence Dakar: a transnational development expert drifting between commitment and expediency”, The Journal of Architecture, 19:6, 2004, 849-871 and Kim De Raedt, “Shifting conditions, frameworks and approaches: the work of KPDV in postcolonial Africa.”, ABE Journal: (4/2013) 1-28 have, for respectively the texts parts on Dakar and Fria, functioned as important sources for this essay. Passages from these articles have been strongly paraphrased (in first, second and last paragraph on Dakar, and in third paragraph on Fria) but erroneously not referenced (Beeckmans) or only partially (De Raedt). The authors wish to apologize for this omission, explicitly recognize the role of the articles as sources and underline their scientific importance.